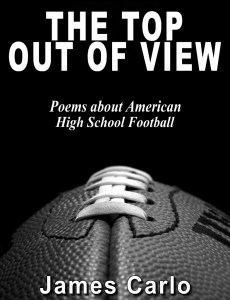 American high school football is a showcase for players’ skills, a Friday night diversion, an energizing community-unifying activity. But there’s more to it than that.

Through a series of free verse poems, the author draws from his years of coaching to highlight scenes from a typical season that usually lie outside public view.

What Inspired You to Write Your Book?
After forty-two seasons of high school football, I felt compelled to capture some of the sport’s intensity and drama through poetry.

How Did You Come up With Your Characters?
Characters in the poems are inspired by the players and coaches I taught and worked with.

About the Author:
Starting in 1969, Jim Naggi coached high school football for forty-two seasons. Most recently, in 2014, he coached American football in Lugano, Switzerland. Naggi’s “Football Coaching Tips” have appeared at www.fbwinnipeg.com every Thursday since March, 2013. He’s also a contributing author of “The Soul of Sport”, due for release by University of Notre Dame Press in August, 2015.

Naggi was born in Detroit, Michigan, and spent his adult life as an educator and football coach at three different high schools on the west coast. He and his wife Donna now reside in Portland, Oregon, near their children and three grandsons.

Have you read this book? Tell us what you thought!